The scientific world is currently studying the question of the universal ether in which, according to the claim of the occultists there is a reflection of all the tones, colors, images and thoughts, manifested in the physical world through the brains of great artists, musicians, writers and scientists who can be compared to receiving radio devices of extraordinary subtlety. About the existence of this fact is evidenced by identical works of art, inventions, etc., often appearing at two ends of the earth. The most scrupulous research rejects the possibility of any plagiarism. It is simply a rapture, one and the same thought wave, color or sound, through two equally-tuned receiving apparatuses of the brain. A clear confirmation of this fact is an accident concerning one of the first literary works of Helen Keller, an incident too well known to be repeated here, and the one I want to relate here which is found in rare notes and biographies from the life of Franz Liszt: 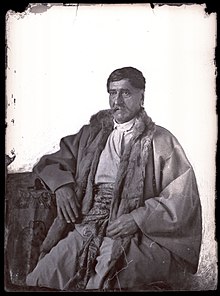 The great Romanian poet Vasile Alecsandri gathered in his residence in Lasi [now Mereni, Moldova] the most chosen spiritual aristocracy of his epoch to celebrate a master – Franz Liszt. During dinner, the glass doors opened and a small group of Romanian musicians entered the shimmering salon with their prima (first musician). Tall, slim, an old man with a long white beard and fiery black eyes full of thought — was the gypsy Barbu Lăutarul [right].

“I want to introduce you, Master, to the music of my country,” Alecsandri said to Liszt, signaling to the gypsy. Liszt listened with delight to the strange, exotic melodies of Romanian folk songs; longing, quivering with tears for “houses” and crazy, fiery “homes”. At last, getting up from his chair, he said that, as a sign of gratitude, Liszt would play for them now an improvisation. 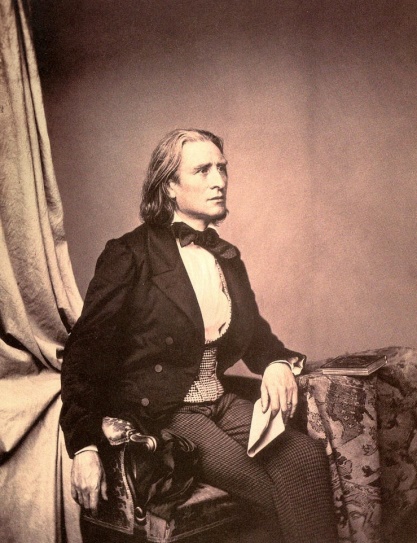 And never have those who knew Liszt’s hand heard more inspired, beautiful and captivating music. Under the artist’s thin fingers the piano lived, it sang, seeming to exude thousands of colorful, fragrant flowers and lights. All the genius and wonderful technique of the great composer of the Hungarian Rhapsody, seems to have reached its peak.

And when all heads bowed in silent homage to the incomparable work of the artist, old Barbu, as if petrified under the spell of a wonderful melody, his violin slipped out of his hands, and his great black, over-dilated pupils were fixed on the Master’s dark form.

Liszt [left] finished. Amid a storm of applause, the old gypsy approached the artist and said: “Boer, you played so beautifully that I can’t express in any other way my delight than to repeat what you had just played.”

The Boers seemed frozen, artists and writers looked with condescending irony at the haughty figure of the Gypsy. Kam Liszt, with a carefully disguised smile in disbelief, accepted old Barbu’s offer. Himself, the great master of tones, [thought] the gypsy could not repeat what he had played under the inspiration of the moment.

The gypsy whispered orders to his little orchestra, silent, with his eyes fixed on the prima’s face. The great Liszt rested his head on the high-backed chair. In the golden light of candles stood out sharply the raw, pale, ascetic profile of a monk. An incredulous smile plastered on his thin lips.

Barbu picked up his violin, put the bow on the strings———-and began.

The musicians accompanied him with an accompaniment as quiet as the buzzing of bees, called “isson”. The first tones of the gypsy violin conjured up a familiar echo, a melody played a moment ago by Liszt. Ironic smiles petrify on the face of Boers. In the gypsy’s dark hand the bow drew from the four strings of the poor violinist a wonderful avalanche of tones. No breaths are heard. The old Barbu Lăutarul cast a spell on the hall.

Liszt closed his eyes, listening. He might have looked like a statue of bronze, if it hadn’t been for the rapid heaving of his chest under his crossed arms and shoulders, showing deep emotion. With amazing accuracy every tone conjured up by the Master was repeated. All the staccatos like quick drops of spring rain, storms of arpeggios and powerful chords – all the incomparable technique of the brilliant musician. The last echoes, light as the breeze of a spring evening – died on the strings of the violin.

Franz Liszt opened his eyes. He got up, looking far away – in the world of tones and melodies – reaching into the Invisible. He took a champagne goblet from the table and approached the old gypsy: “Drink, Barbu, drink, my Master; (bois Barbu, bois mon Maître) if they call me a musician, you are a hundred times greater than me.” The great Liszt bowed his head. Tears streamed down the gypsy’s swarthy cheeks. According to Liszt, it was one of the most beautiful moments in his life.

Notes: This story actually happened, with embellishment here, recounted in another article. The rendering of the photo of Barbu is from the only known image taken of the man. There is an article in Romanian on his life.

Not in the article, but there is a bit of further reading regarding Liszt and gypsy music, HERE.

Bracketed text and photos are added for context.