By specifying the 26 letters of the alphabet with ordinal numbers and adding their meanings, we get: 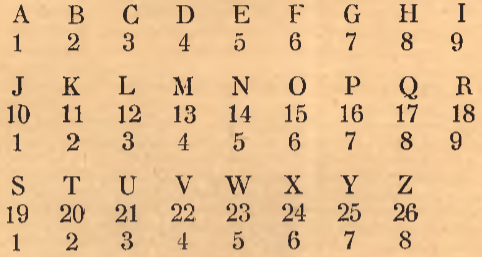 Yes, but if these Pythagorean enumerations are considered in the mind of every thinking individual, the question arises:

Right, A is the first letter of almost all alphabets in the world. This is due to its timbre, sound and shape. This letter has the form of a creative triangle (the problem of the external shape of the letters was already discussed in one of the articles). The letters of the alphabet have retained their form and ordinal number over thousands of years and are strongly magnetized by the cosmic vibrations constantly hitting them, giving them a specific, unchanging value.

The vibration determined by the number 1 gives the letters A, J, S creative power, initiative, boldness, independence, pioneering spirit. Vibration 2 produces in B, K, T diplomacy, tact, organizational and imitation skills. 3 fills C, L and U with the joy of manifesting itself along the lines of art and humanitarianism. 4 gives D, M, V intellectualism, sense of duty, joy of work, love of science and method. 5 brings a lot of changes E, N, W, forces you to look for experiences in all areas of life. 6 endows F, O, X with pedagogical talent and a passion for philanthropy. 7 gives G, P, Y qualities of spirituality, the desire to improve and gain wisdom and fame. 8 brings material prosperity to H, Q and Z, if they wisely and selflessly rule their energies. 9 pours success on I, R in the field of art, literature, healing, making the whole world a field of their work.

In addition to the 9 basic vibrations, there are two more, called the numbers of masters: 11 and is usually the beginning of a new cycle, inspiration and psychism. 22 is the highest vibration, connecting the world of spirit with matter.

Modus Operandi: If we want to find out what our number is, we write the corresponding number above each letter of the name, e.g.: Edgar we add them in this case we get the number 26, then we add the sum of the numbers again until we get a unique number (2 + 6 = 8). It should be added that this rule does not apply at all to the numbers 11 and 22; we always leave them unchanged. We do the same with Poe’s surname, 7, = 18, = 9. Then we add the number of the name and surname again until we get a unique number: = 17 = 8. The name reveals our past. The full name reveals our psychic selves as a legacy of past lives. It is a portrait of us from the past, revealing our essential nature, likes, inclinations, ups and downs. And here lies the invaluable help that the science of numbers offers to modern psychology by completing, straightening, and building up its theses.

Vowels as an expression of the Soul. The vowels of the name and surname speak of the innate talents, abilities and aspirations of the individual. So they are a manifestation of the soul and the subconscious, in which the achievements of thousands of years have been accumulated.

Consonants: Body, Personality. The expression and symbol of our personality, our external appearance, are consonants, which are the crystallization of thoughts. The number of consonants speaks of the type of personality and physical constitution, and the influence exerted on the environment.

Total Number. Mind. The type and tension of our mentality is characterized by the total number of the name, indicating the type of mentality with which we enter our present life. It is the natural result of our previous efforts, it is the foundation on which in the present incarnation we can build a temple, a palace, an inn or an inn as a symbol of our existence. So the number of the name is ours.

Photography. We are the meaning of our name. The world judges us by our number, and our signature is our total image at the present moment. We are older than the pyramids of Egypt or Yucatan, more enduring and resisting thousands of storms. Perfection of any kind is symbolized by an isosceles triangle, because it is a reflection of the Divine Trinity on one or another plane. Pyramids whose base is Q with sides, consisting of 4 equilateral triangles, uniting at the top, are the most plastic glue of the triple repeated 4 times. And man, like the pyramids, it has a similar construction: the lower quadruple and the upper triangle. In addition, the triangles and numerical triangles of the name and surname speak of man’s achievements on various levels.

CHAPTER IV. The law of vibration is the law of poles or opposites

We can always go as far to the right as we went to the left. Everything depends on the inner force that directs the outer manifestations. Hence the frequent conversion of sinners who begin to strive for perfection with the same intensity as they previously denied it. There is, however, among human types one that corresponds to the momentary stopping point of the pendulum. Of such people the Gospel says they are warm. Incapable of great ecstasies, deep passions and highs, they are as if frozen in time. Inertia becomes their undoing. When examining the meaning of numbers, both their positive and negative aspects should be taken into account, as well as this point of inertia. The same is true with the influence of the stars. Astrologers are familiar with this theory. Numbers are divided into 3 cycles: 1) Nature’s Triangle Cycle 1, 2, 3. 2) Human’s Quadruple Cycle 4, 5, 6, 7, and 3) Supermen’s Cycle in becoming a quadruple reflection of the primordial triad, , ,

Number 1. Positive aspect: Creative abilities, originality, independence, accentuated individuality, aggressiveness, initiative, pioneering spirit. Coordination of thought and action. This is the number of inventors, pioneers, conquerors; and since 1 is part of every number, it has a very strong influence on all other vibrations.

Negative aspect: Arrogance, desire to lead, selfishness, striving to satisfy one’s whims without regard for others. Impertinence.

Number 2. Asp. positive: The manifestation of two is on every plane. Having masculine, aggressive traits with both a soft, feminine side to the character. Tendency to cooperate, collect information. statistics. Pedagogical talent.

Asp. negative: Criticism. Searching for spots in the sun, caring forever about what others might think or say. They like the pose and the flattery.

Middling: Indifferent to external appearance. An obedient tool in the hands of the stronger, the helpless and the lazy.

Number 3. Asp. positive: Complete and joyful manifestation through art or beautiful and extensive work for humanity. They dream of happiness, prosperity and health for the broad masses. Creativity characterizing 1 is combined with tact and methodical approach 2. A sense of humor.

Middling: Indifferent to beauty and art, not fond of music, untidy and absent-minded.

Number 4. Asp. positive. A builder on the plane of matter or mind. Conscious and himself, always active. Their work is methodical, analytical and conscientious. Self-development always plays a dominant role and the pursuit of perfection is strongly emphasized. They are the best and most conscious employees.

Negative aspect: Critical, life full of limitations and hard work. The penchant for analysis kills all possibilities, and thrift turns into stinginess.

Number 5. Asp. positive: Experience Seekers, exploring life from every point of view, in love with new events, landscapes, people. Full of magnetism, talkative, devoted to philosophical studies and metaphysics. Connoisseurs of human nature. Fiery temperament and strong attraction to the opposite sex, always controlled by willpower. Sowers of enthusiasm and masters of rejuvenation.

Negative Asp: Overwhelmed by violent desires, untrustworthy, in the eternal pursuit of prey. Destroyers of homes, peace of others for selfish purposes. material, unstable and slaves of the worst impulses

Number 6. Positive: Guardians of home, teachers and social workers. The maternal instinct is very strong. Faithfulness and devotion to one’s family, friends. Full of energy and enthusiasm, excellent speakers, they don’t talk much about a lot, they do a wonderful healing job.

Asp. negative: Overbearing, imposing their will, not caring at all about other people’s point of view. Surrendering to cares and worries, interested only in themselves. Stubborn and blind, they are often abandoned by their friends. In need of flattery and praise.

Middling: They bend under the burden of duties, scapegoats their loved ones, do not care about appearance and their own well-being.

Number 7. Positive Aspect: Fountains of Wisdom, of depth rarely duly assessed. The number 7 is a symbol of perfection, balance, high culture, and a strong, indomitable will. Sensitivity and pride keeping oneself apart from the crowd and hiding hot, deep feelings under apparent coldness. Generosity and kindness, but also love of solitude. The ability to adhere to mysticism and the occult. Misunderstood by the environment, they never ask for advice and help.

Asp. Negative: Restless, eternally wandering, they pass from this event to others, unspeakable. Ironic, atheists, brutally indifferent to people, mocking everything that bears the stamp of subtlety and spirituality.

Middling: Total inability to create feelings, misunderstood by care and oneself. Dreamers, avoiding efforts and action.

Number 8. Positive aspect: Balances spiritual and physical influences. Inspiration even in material matters. The breadth of reconstruction plans. A builder on all levels, tactful diplomats, outstanding businessmen. Those in whose hands power and authority are gathered in one sense or another.

Negative aspect: Merciless. Usurer, exploiter, egotist and selfish, bringing ruin to others and himself. Indifferent to the suffering of others.

Middling: Victim of unfortunate circumstances. The type of “failed man” who is constantly “removing the ground from under his feet”. Until the 8 learns to work for the good of others – he will be constantly haunted by failures.

Number 9. Positive Aspect: Those who love humanity as a whole, displaying their diverse talents in a wide, astonishing way. Love and money are their lot – if they skillfully set in motion the current of kindness and sympathy for every living being. A sensitive, deeply emotional nature, nervous and passionate. Feeling needs from the point of view of others. The whole world is the field of his work and experience. A true cosmopolitan – he has the same feeling for all living beings.

Negative aspect: Sarcastic, selfish, they awaken destructive passions in others, always having self-interest in mind, wanting to “get everything for nothing.”

Middling: Obedient servants of their own passions, used on services and for the purposes of more powerful entities.

Number 11. Positive aspect: Enthusiasm and internal dynamics, acting under the influence of inspiration. A spirit sent for the good of humanity. Great wisdom, concentrated in the subconscious, allows immediate recognition of people, moods, conditions. A multitude of original ideas that must be put into practice lest they coagulate and obstruct the circulation of spiritual energy.

Asp. negative: Low characters, indulging in all kinds of vices.

Number 22. Positive aspect: Master of all planes – by using laws unknown to nature. Complete mastery of your personality. A powerful impact on the environment. Making humanity’s wildest dreams come true.

Middling: Lazy and indifferent, bending under the influx of their own unused energies. Constantly subjected to physical ailments and depression.