RELATIONSHIPS BETWEEN THE FIVE ELEMENTS

Every element has a basic relationship with every other element within the Five Element cycle. The most common nomenclature used for those relationships are as follows:

GENERATOR: Benefactor/Grantor (the element that causes the increase of the succeeding element. It “feeds” the next element.)

GENERATED: Offspring (that which is produced by the preceding element)

CONTROLLER: Ruler/Driving Force (the element that pushes one to change through friction)

CONTROLLED: Money (that which is earned through controlled effort)

With the preceding as a starting point, consider the following chart: 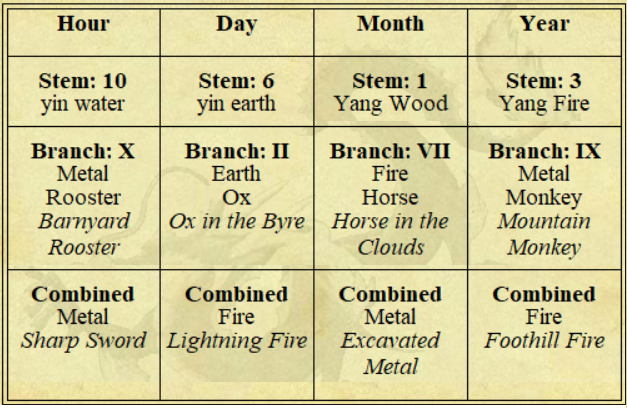 With the element counts:

The one thing to aim for in a BaZi chart is a balance of all the elements, meaning each of them should be in the range of 2 or 3. The chart above is not a balanced chart in that regard. In terms of yin and yang it is balanced, but with the elements we see a dominance of Fire and Metal, and a lack of Water and Wood. This makes for a personality that is dynamic and forceful, as well as charismatic. At the same time they can be rather secretive and too particular about their surroundings. Water needs to be brought up in strength, which will generate more Wood. It would also dampen the Fire, allowing the Metal in turn to generate more Water. It would not be an easy thing to do, because Water is difficult to raise and is fragile. ‘Water tends to run deep’, is the idea. But in this case it needs to be done. The table below is a refinement that has been put forward by Lily Chung and explains how to balance the elements: 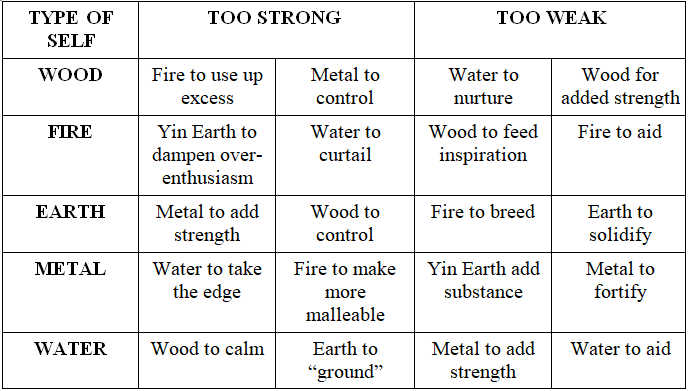 Since the Self is defined primarily by the Day Pillar, certain elements will be needed to balance an individual. Certain elements will feature strongly and others will be weak. As we know, each pillar is divided into a stem and branch pair. The stem defines the primary elemental emphasis of each pillar. As such, it is the predominant coloring and psychology for each Pillar and it is the only one that has a polarity, Yin or Yang. But, the elements from the Branch and resultant elements can aid in the balance of the Stem element for the Day Pillar. In Chung’s system she also adds the factor of “Kin” to aid and support weak elements. The kin of Fire, for example, is also Fire, but it would be drawn from another section of the Four Pillars. What is given above is a simplistic indication of how the system works.

Elements can be balanced in many ways – by the Annual Pillar, the Luck Pillar, by relationships with other personalities that exhibit the needed traits and by actively developing the missing quality, while focusing less on the over-dominant elements. Feng Shui changes to the immediate environment would serve to help the situation as well. And the chart? – it is that of the United States. So, we see that more openness is needed (raising the level of Water), a more expansive view and contacts and focusing more ‘down home’ (raising the Wood element), with a less aggressive approach to affairs and reining in the tendency to want to shine too brightly. Perhaps this gives us some hints as to how this system begins to work. The essential qualities of the elements are shown in the table below, which gives further indications of how they can be utilized as well as how they present themselves. 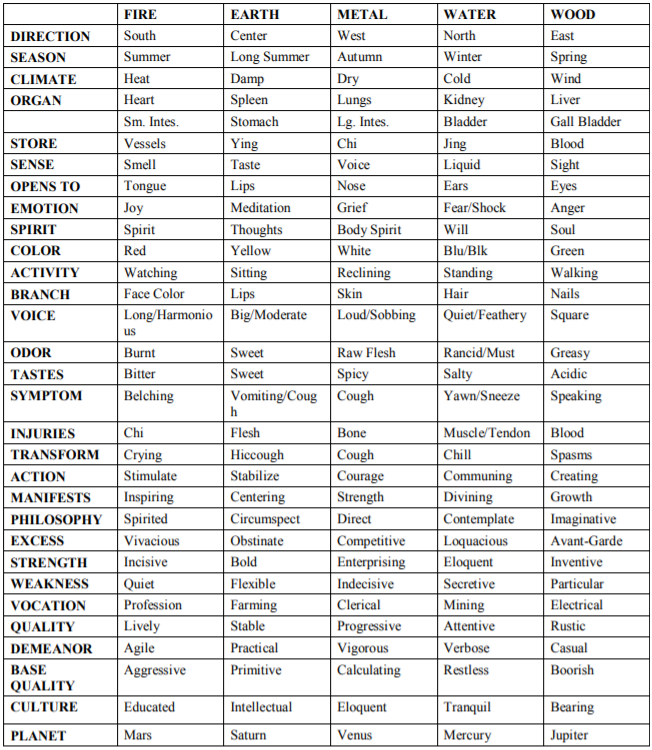