THE FOUR PILLARS OF DESTINY 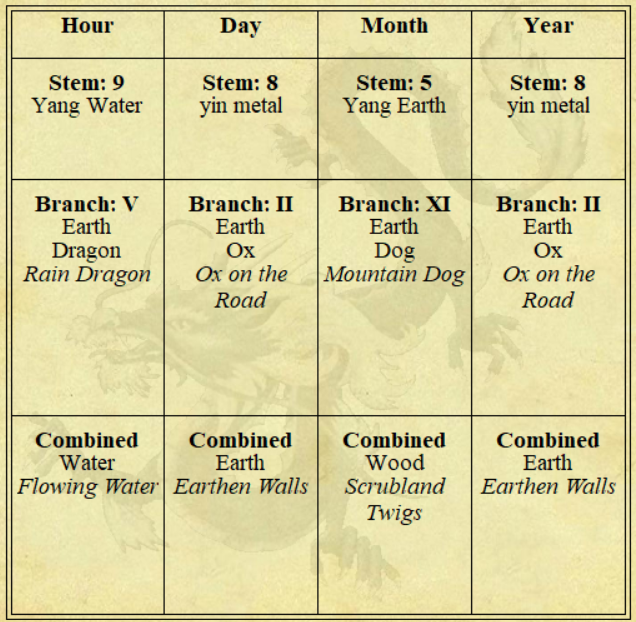 The Four Pillars, also known as BaZi, are the cornerstone of all popular Chinese astrological work. Without a thorough understanding of this system, any further work with Chinese astrology is much more difficult, if not impossible. The Four Pillars demarcate the relationships between the Five Elements and the Twelve Phases (Branches) that were in effect at the hour, day, month and year of a person’s birth. They are analogous to the ascendant, Sun’s degree, zodiacal sign and aspects, respectively, in the Western system, although they are not identical to them. 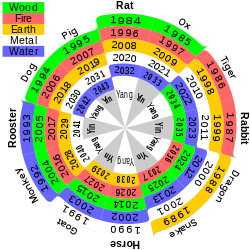 The Pillars are based on a hexagesimal cycle (cycle of 60) of the combinations of Yin and Yang, the Five Elements and the Twelve Phases (Branches). The Pillars define the basic qualities of a person and their immediate environment for the person’s life, based upon the combination of Stem and Branch for any given pillar. Every Pillar is divided into two main sections – a Stem, denoting one of the Five Elements and its polarity and, a Branch – more commonly known as the “Animal Sign”, denoting the phase through which the Stem operates in that pillar and its relative strength. There is also a third section, not commonly used, that is a Resultant/Combined/Harmonizing Element derived from the preceding two. So, we have the following construct, from top to bottom of the Pillar:

It is common in the English nomenclature of the Pillars to denote the Stem by an Arabic numeral or capital ‘H’ and the Branch by a Roman numeral or capital ‘E’ for ease of distinction. In the case of using ‘E’, the Arabic numeral is used. The ‘H’ stands for ‘Heavenly Stem’ and the ‘E’ stands for ‘Earthly Branch’. The Combined Element is based upon the pairing of the Stem and Branch combination and its order within the hexagesimal cycle. Thus, we have a possibility of ten Stem variants (the two polarities of Yin and Yang for each of the Five Elements) and Twelve Branches.

The Branches begin with Branch I, or E1, denoted by the Rat. It should be noted that these Roman numerals have no numerical significance. They are simply used as identifiers in the Chinese system. The animal cycle for the Branches is as follows: Rat (I), Ox (II), Tiger (III), Rabbit (IV), Dragon (V), Snake (VI), Horse (VII), Sheep (VIII), Monkey (IX), Rooster (X), Dog (XI), and Pig (XII).

These cycles of ten and twelve are independent of each other. They both start at 1,I; 2,II; 3,III, etc., until they have combined sixty times, after which the entire greater cycle starts over again. Hence, there are sixty possible combinations of Stems and Branches, which is easily seen from the table in Stem/Branch Equivalents. Unstated in the Stem/Branch relations, though, is that each of the Branches will receive each of the Elements at some in the greater cycle of 60. Thus, each Element will undergo a phase of greater or lesser energy as it is paired with a Branch. 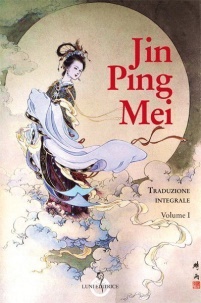 Each of the Combined Elements takes its name from a particular pairing of Stem/Branch combinations, so there are 30 variants of Combined Elements. These are sometimes called “Harmonious Elements”, and a few are expounded in Chapter 46 of the book Jin Ping Mei, written ca. 1590, although they were certainly known before that. The book was banned for centuries in China because of its explicit sexual content, having been deemed pornographic.

It should be noted, too, that there is no polarity (Yin or Yang) associated with the Harmonious Elements. They were added to give the general fortunes of the Pillar with which they are associated, and they are not meant to be descriptive of character.

For any particular date and time it is possible to construct four Pillars based on the Chinese solar calendar (for the year) of that instant. However, the Month Branch runs from new moon to new moon.

The Four Pillars are:

Additionally, this system may be extended to include other Pillars, outlined below.

In addition to the animal name for the Branch, each Branch is also given its own Element or set of Elements, which is subsidiary to the Stem element in the Pillar, as well as a descriptive phrase. They are not found in classical Chinese Astrology texts. These extra descriptors for the Branches are derived from their place in the hexagesimal cycle. These extra elements are sometimes called the ‘Human Elements’. For more info on the Human Elements, see Lilly Chung’s The Path to Good Fortune)

There are sixty variants of the descriptors for the animals. These are derived from the combination of the associated element and the animal (5 sets of 12) within the Branch. The animal names of these Branches are most commonly known through their widespread use in popular Chinese astrology, which refers to the animal of the Year Pillar’s Branch for someone’s year of birth, as mentioned previously, or just to a year in general (for example, the Chinese New Year of 2004 is a year of the Monkey).

The meanings of the Four Pillars can be broadly defined as follows:

And, if one uses them, there are additional pillars as follows:

In one system it is said to be calculated on the basis of breaking the Chinese double-hour into 45 minute segments. Another method uses 10-minute segments of the double hour, the first ten minutes being the Rat Minute and so on, and using the Stem for the Hour Pillar on all the Minute Pillars. We used still a different method in The Imperial Astrologer software using the actual double-minute, going through the entire 60 Stem-Branch combinations in one hour. See the ‘Note’ at the end of this page regarding The Imperial.

Yet another system uses 6-minute intervals of a standard hour (60 minutes), divides them into 10 sections, progressing through the Stems and Branches in 6-minute intervals. The caveat is that midnight and noon are always Horse hours, no matter what day is entered. There is an online calculator to perform that calculation.

There are also four extra Pillars sometimes used in consults, depending upon the astrologer, as follows:

The Conception Pillar is read in relation to the Year Pillar, the latter representing one’s birth environment. As a point of interest, the old system of BaZi used the Year Pillar to indicate the self, which is a throw-back to an old era, where people generally did not live very long and the circumstances of one’s birth pretty well dictated the course of a person’s life. Serfdom comes to mind, as well as social caste. These days, the Day Pillar indicates the self, where we have more freedoms, live much longer and can choose the path of our destiny, more or less.

Note: For people who want a calculator that will give these four extra Pillars, one can download a free version from Gmulis. It is safe. I have used it. The old Imperial Astrologer software (another story for a future post) I had done with Esoteric Technologies some years back does not do these calculations. It is also no longer for sale, but the tutorial is still available online. The methods for doing these extra Pillars are handled in a separate post here if you want to do them by hand, along with interpretations.