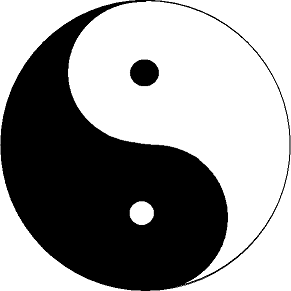 Aside from the Five Elements, yin and yang are the most essential consideration in Oriental philosophy, for these concepts are the basis of all change and transmutation in any system – natural or philosophical. Yin is commonly associated with the feminine principle, and yang with the male. However, there is much more to it, as can be seen from the following correspondences:

Yin and yang should be seen as complimentary transformations in nature and humans. The two interact and always tend toward balance, other factors being equal. All other things arise and recede in response to the interaction of yin and yang. Yin and yang form a sort of “closed-loop” system, in that balance in nature is always maintained. If yang gets too strong it tends to become yin – i.e., yang collapses in on itself if it gets too over-extended because it loses its strength. If yin gets too strong it becomes yang – i.e., yin becomes hollow and hard if it overextends itself because there is only a finite amount of the yin essence. The essence of each is said to be held in the bosom of the other, as is represented in the famous yin/yang diagram.

And neither yin nor yang can function without the other. Yin without yang is amorphous and has no vessel to contain it or give it force or form. An analogy would be a quantity of water, representing an essence. With no structure the water just spreads, finding its lowest level, thereafter becoming stagnant. However, if there are walls (yang) to contain the water it becomes useful. It can be a nourishing reservoir, a place for fish to live, or a beautiful lake to enjoy. If the walls are opened at a point and the water flows into a channel, as in a river, it brings life to everything along the flow, or cleansing force. The banks of the river control the velocity of the water, too, depending on the inclination and the amount of water.

Yang without yin is an empty shell, devoid of life or essence. A dry lake or river bed is a dead space, waiting for something to fill it. Likewise in a human being, an overly yang person will be forever searching for his or her essence, maybe in constant movement, but devoid of compassion and lacking stability, always active but never stopping to think about their action. Conversely, an overly yin person will tend to be too settled and not disseminate their wisdom (essence). With no movement, the tendency in the overly yin person is to stagnate and become isolated from the world, being too inward to be of help to the society around them.

Everything in nature is thus polarized to some degree, but it is never a static construct. Just as the seasons come and go, yin and yang rise and fall in a person and in nature. But the tendency is always toward balance. The polarized elements, yin and yang, are the basis for each of the Four Pillars, for instance, and set the tone for each one as a result. Once the polarity of the Stem and its Element are determined, one can then move on to a consideration of the phase that each Pillar represents, because each of the Four Pillars defines a part or segment of a greater cycle. In a Four Pillars chart one will often find an imbalance between yin and yang.

We see men sometimes that have a preponderance of yin pillars and women who have a preponderance of yang. This does not in itself indicate that yin men tend to be more feminine, for instance, or that yang women tend to exhibit more masculine traits. Instead, a preponderance of yin in a man indicates a man that tends to be more reflective rather than active, more inclined to spend more time thinking before acting, is less impulsive, more pliable to outside influences, etc. In the case of a yang-polarized woman, as a further instance, we see a person who takes charge of her environment, who tends to be more impatient when things do not move in the way she would like, who likes to mold her relationships and will be more proactive in her dealings with people. In people where the four pillars are balanced, then we see a person who can either exhibit a ‘balanced perspective’, or in more extreme cases a ‘split personality’, and this will depend upon the elemental makeup and environing influences. So, yin and yang are not black and white, we might say. Instead, they form the basis of the complexity of the individual and the person’s unique ‘take’ on life or their special genius along some line of another.

There are a number of concepts that govern the expression of yin and yang in human nature. A human being is an equal partner with the laws of heaven and earth while in a physical body. From our point of view these laws are fixed, but they are changing and evolving ever-so-slowly themselves, such as to be imperceptible to us. We have freedom of choice in what we think and do. So long as we work and think in keeping with the laws of heaven and earth we will have good fortune and success. We do best for ourselves when we work selflessly and in harmony with the laws of heaven and earth. However, karma does come back to its originator (meaning us) in universal time and this can often override our free will. This is not inevitable. If we develop ourselves spiritually and enter the realms of spirit through practise and purification, however briefly, we can override the physical karma that comes to us. We therein manifest divine will, and we progress spiritually the more we come to understand and work within the laws of heaven and earth. There are no measureable changes in those laws during our sojourn in physical life. Only we as individuals can fully understand the real truth about ourselves and life. This is a part of our individual freedom.

In the preceding paragraph we have the basis of all types of astrology. Since we are an equal partner with the laws of heaven and earth, the moment of our birth can be seen as an act of free will, being based upon how we have lived in past lives. Considering these points, and adding to the complexity of the individual, yin and yang will also tend to show the areas where one takes charge of their life or where they are more passive. A person who has a yang hour pillar, for instance, will have a very active and seeking mind, tending toward creative output and toward trying to mold their world into the mental visions they have. Yang-minded people create their own world of thought and are not so open to other people’s ideas. A yin hour pillar gives a more contemplative, inward-focused mind, one that is comfortable in its own world, tending toward dreaming, more meditative, more absorptive of external influences and is open to impression. But both yin and yang have and exhibit their own particular brand of power and influence. One should not think that yang = power or that yin = weakness.

Some of the more powerful signs in the Chinese zodiac are the yin signs, such as Oxen and Sheep. There are many world leaders who have these two signs in their makeup, such as Margaret Thatcher or Barrack Obama, for instance, both having the Ox as their year pillar. There is a stubborn determination which yin can exhibit, as well as strong opinions that are difficult to shake or influence. Margaret Thatcher was known as the “Iron Lady”, after all. She was primarily yin (three of her four pillars), with her only yang pillar being the day pillar, but she had a powerful and lasting effect on British government, whether or not one agreed with her policies. And perhaps the one thing that contributes so much to the power that yin can exhibit is the idea of ‘staying power’ – the ability to constantly renew one’s energies by virtue of the excess of yin. And Thatcher is a good example of how too much yin can become yang.

In terms of Chinese astrology and as an example of how yin and yang manifest through the Four Pillars, we have the following possibilities of yin and yang through each of the pillars:

From all the preceding, then, we see that yin and yang as concepts may be clear enough, but the way they express through a person and in nature can indeed be complex. But in considering yin and yang, the polarities they represent are fundamental in understanding Oriental philosophy and Eastern methods of astrology in general. We end with the expression of yin and yang in nature through the elements;