The Mansions of the White Tiger 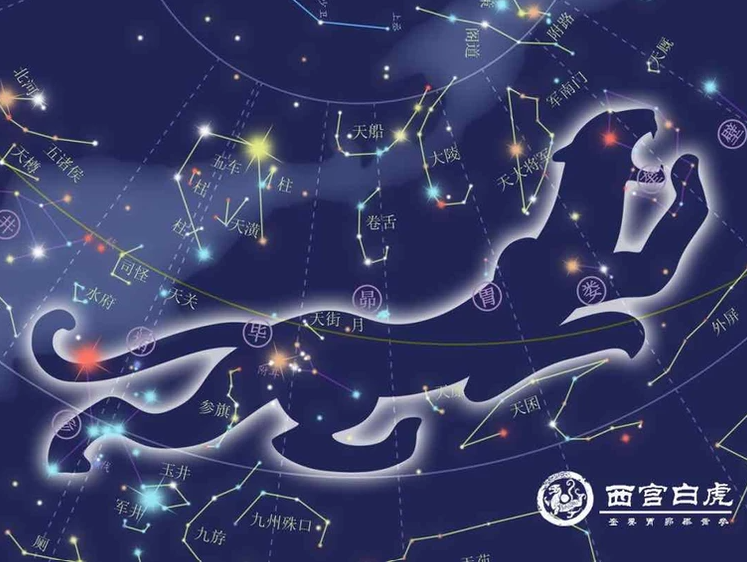 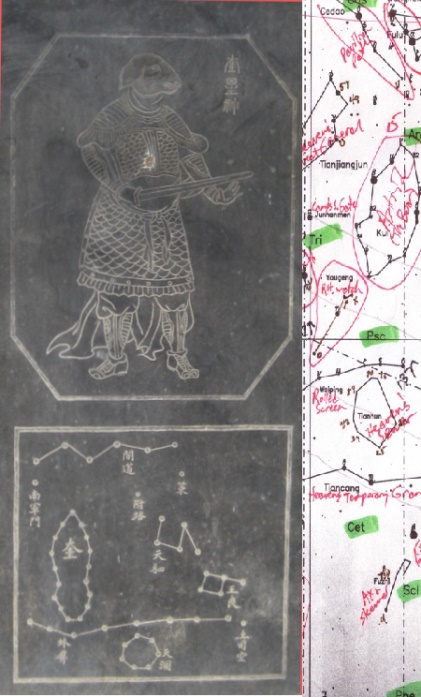 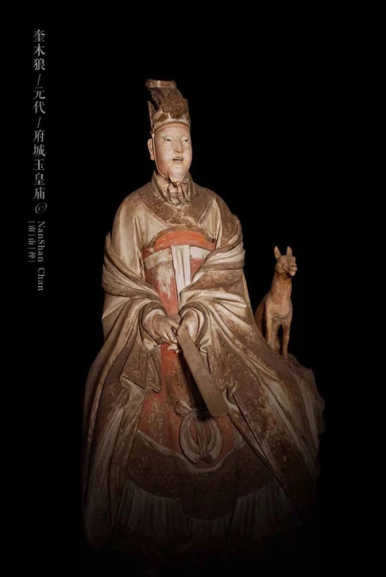 Auspice: Unlucky. One should not engage in construction on this day or riches will not come to the house. Digging will be flowed by a succession of misfortunes. Likelihood of family quarrels and discord among acquaintances. Lawsuits are lost. Sickness takes a firm grip. Burial on this day will produce the mysterious death of another.

Comments: The form of the constellation is supposed to resemble the sole of a shoe, also said to represent a man with his legs astride. It represents the arsenal of the Emperor. Wash old clothes on this day and double the thickness of the lining within garments, against the coming cold of winter.

From China Fetching: This mansion is located in the legs of the White Tiger, and is in charge of the army and water conservancy. People of Leg Wood Weasel Mansion are fortunate, wealthy, honest, friendly, genuine, romantic, talented, sometimes stubborn. They may encounter setbacks in the middle-age period, but if they could be strong and persistent, to avoid speculation and gamble, everything will be regained. 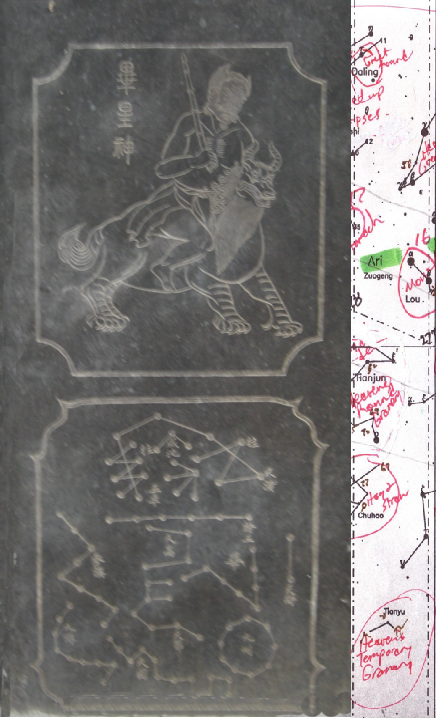 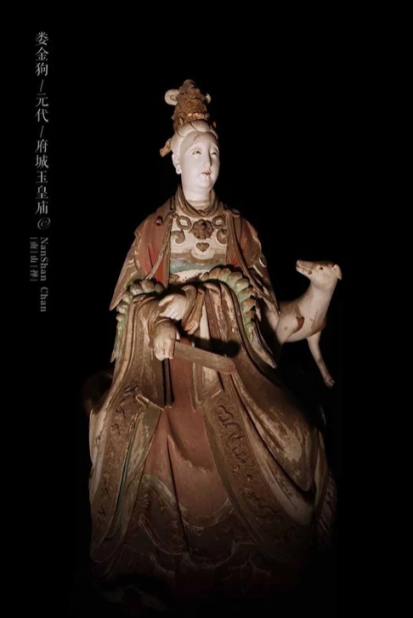 Auspice: Lucky. Building today is like building the gates of heaven. The family will be richer, everything will prosper, and there will be many joys. Funerals will lead to social promotions and marriages will lead to complete harmony.

From China Fetching: This is the place to raise livestock and store collections in heaven, and correspond to the prosperity of the whole nation. If the main stars of this mansion are bright and stable, it symbolizes people are living in peace and wealth; if they are gloomy, it indicates wars and unstable lives. The people of Bond Gold Dog Mansion are energetic, smart, curious, efficient, diligent, reliable, sometimes capricious. They may experience something unpleasant or difficult in childhood and early years, but as long as they are down to earth, they would be fortunate and settled since middle age. 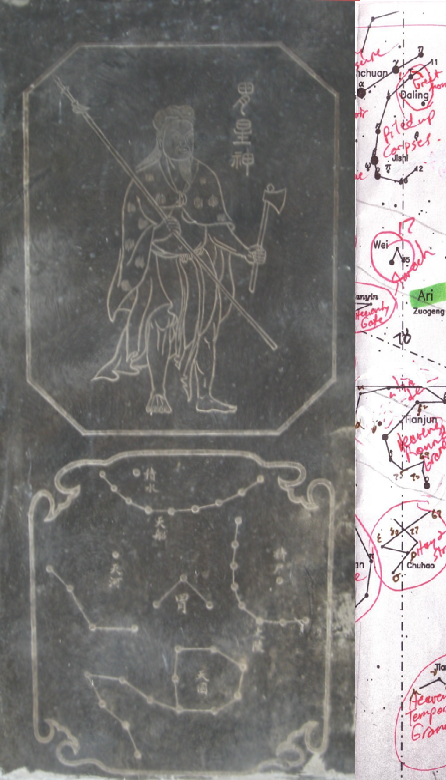 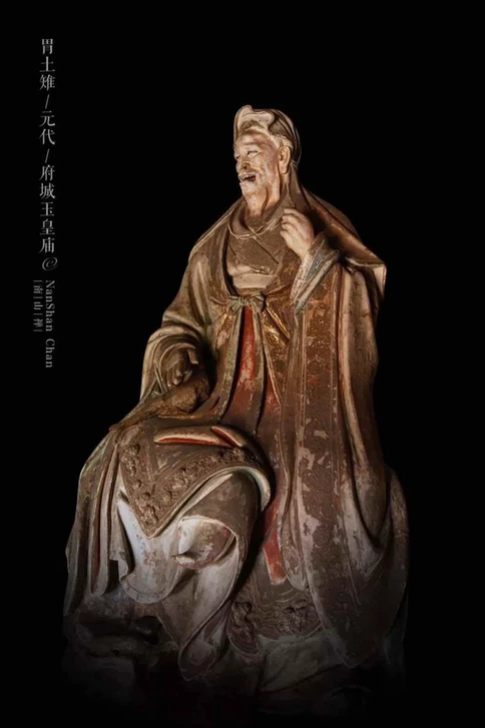 Animal: Pheasant. To those who build on this day all comes like a wind blowing precious glory, fortunes and many joys. Marriages will be of flourishing harmony and funerals will bring social promotion.

Auspice: Lucky, a sign of good fortune. The accumulation of wealth. A lucky day for building or burial. Children born of marriages contracted on this day will be familiars of the Emperor.

Comments: The constellation actually refers to a storehouse instead of a stomach. It is the Celestial Granary. It signifies riches, but was also known for imprisonment in the old texts.

From China Fetching: This is the stomach of the White Tiger, and the stars there are in charge of grain, warehouse, and hunting. People of Stomach Earth Pheasant Mansion are strong, unbending, competitive, ambitious; some of them might be irritable and extreme. They are likely to experience many ups and downs in life; but if they could try and be caring, sensitive, and build good relationships with others, they can get a stable, happy life. 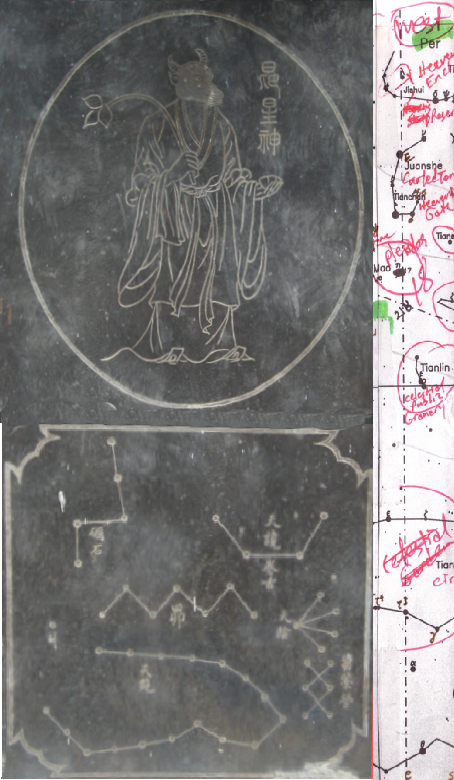 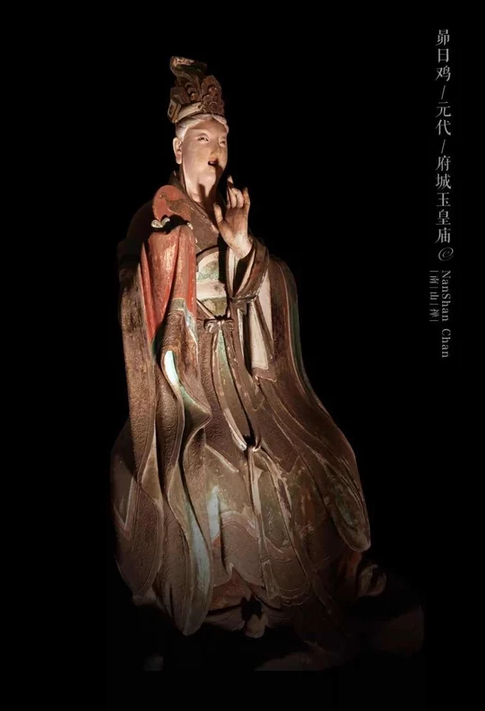 Animal: Rooster. To build on this day is to let the buffalo into the paddy field. Funerals lead to worry. To start anything will lead to calamities and marriages will be miserable.

Auspice: Unlucky. Presages lawsuits and death within the family. The results of misjudged actions, as in construction or diging, heralds unhappiness, when little children will be as close to the grave as old men with long beards. Marriages contracted on this day are woeful, with the separation of the partners.

Comments: The Pleiades are the determining constellation of the Western Palace. When the Pleiades flickered it presaged invasion by barbarians. If clear and bright, legal proceedings will be dropped. In general it indicated military involvement, and touched on untimely death.

From China Fetching: Located in the center of the White Tiger, this mansion is believed the guard of the royal palace. Hence, emperors would hold sacrifice ceremonies to worship the Hairy Head Solar Rooster. The people of Hairy Head Solar Rooster Mansion are kind, generous, eloquent, fortitude, thrifty, and talented. If they can conquer the weak points of their personalities, most of them could get a good life. 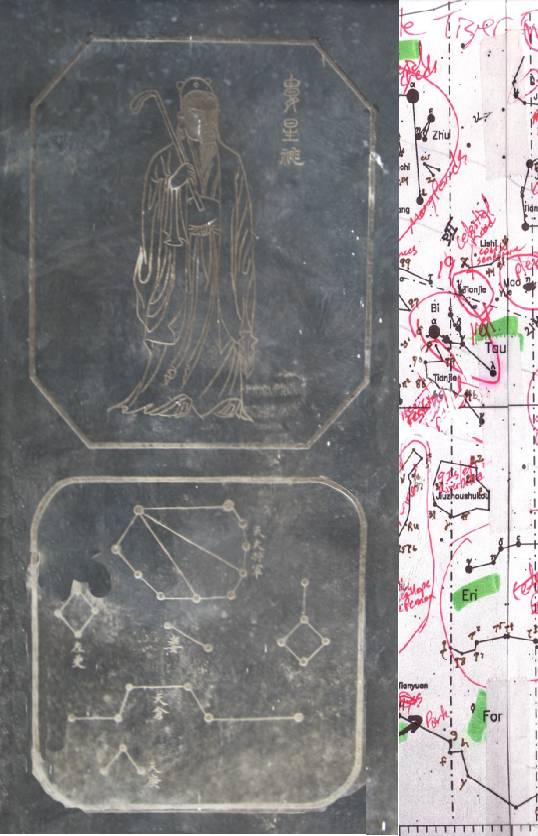 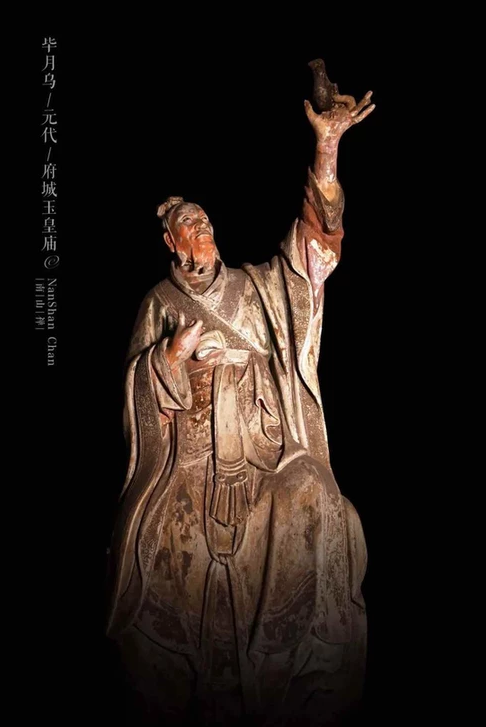 Animal: Crow. There will be light on those who build. Paddy building and silkworm rearing will bring years of plenty. Luck and fortune will come to your home. Marriages and funerals will bring doubled longevity.

Comments: The connotation of the constellation (Hyades) is that of a net catching all manner of fish and game. It is therefore a fortunate sign. It is fortunate for building and internemnet, the former bringing fortune, the latter bringing honors. Long life is assured to children born of a marriage performed on this day.

From China Fetching: This mansion corresponds to troops guarding on borders. Hence, it is an important mansion of the White Tiger section. People of Net Lunar Crow Mansion are modest, firm, idealistic, brave, wealthy; but sometimes might be overconfident, indecisive, and lack adaptability. Because of their lack of persistence and sometimes over idealistic, they are possibly missing good opportunities sometimes; if they can overcome those shortcomings, they are likely to achieve success. 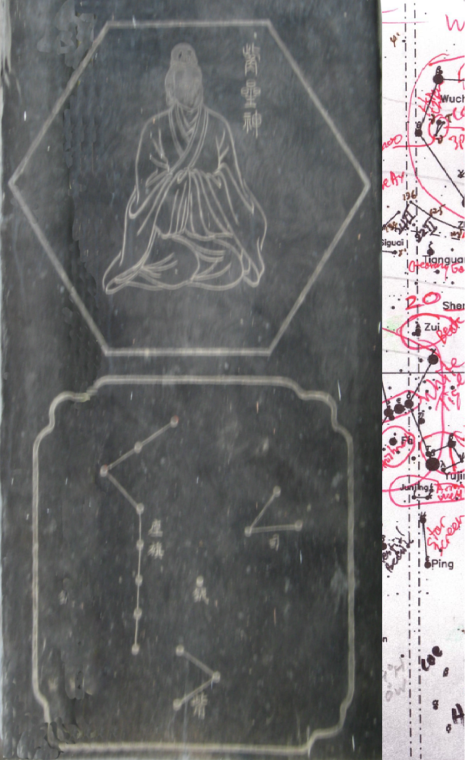 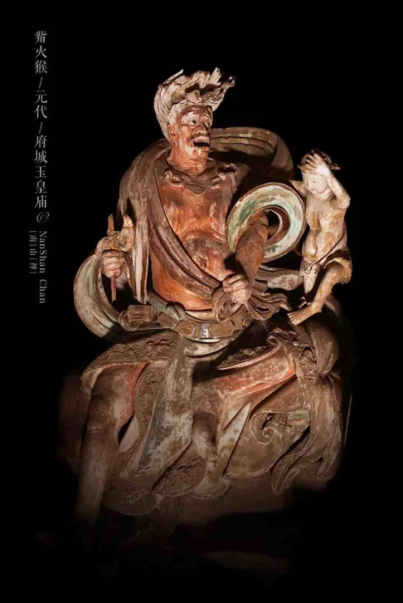 Animal: Monkey. Building today will bring a lawsuit. A funeral will lead to the collapse of the house, with at least three deaths to follow and food reserves will dwindle.

Auspice: Unlucky. Presages punishment and exile, a fatality in a yin year (Tiger Year), the necessity to sell property, arraignment for murder and a death sentence. These would, of course, all be the results of wrongdoing.

Comments: The name of the constellation refers only to its form and is unassociated with the quadrant of the Black Tortoise/Dark Warrior. The auspices of this mansion should be taken as a stern warning against wrongdoing instead of any kind of fait accompli. The constellation presided over flocks, herds and people under protection.

From China Fetching: It is located in the position of White Tiger’s mouth, and the stars of this mansion formed a pic that looks like a lip, hence, this mansion is in charge of eloquence and gourmet. The people of Turtle Beak Fire Monkey Mansion are discreet, talkative, polite, sometimes might be overconfident or rebellious. Based on personality, the people of this mansion might be super fortunate or adverse. Hence, sticking to moral standards and self-cultivation helps be successful and well. 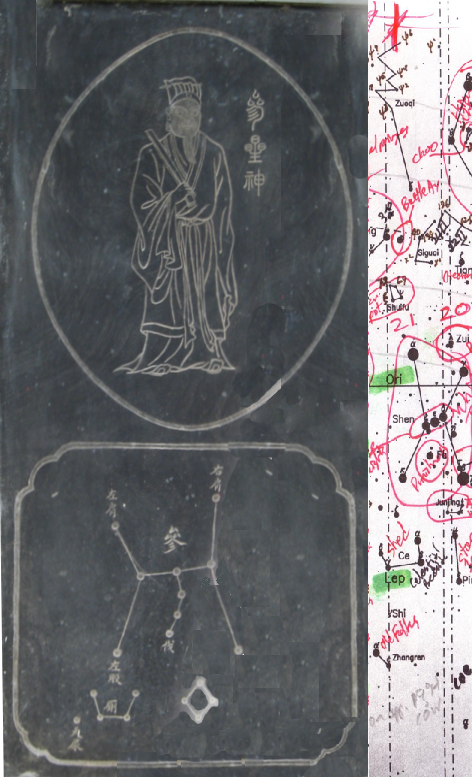 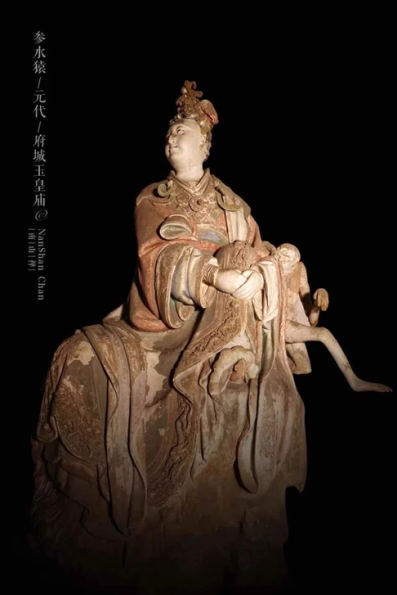 Animal: Ape. Build today and prosperity will come. The star of a lettered man will give light. Irrigating the paddy field and business will be fruitful. But marriges and funerals will break up the family.

Auspice: variable, depending on one’s actions.

Comments: Orion presides over decapitations, executions, massacres, fortresses and frontiers. The luck varies according to one’s actions. For those who build today there will be rewards.beginning new ventures presages success. It is not a lucky day for winding up affairs or burials, as these will be followed by sickness or the death of a distant relative. Nor is it a good day for marraiges pr betrothals, which will end in the separation of the parties. For other new ventures, however, dignities will be conferred. Industry is the keynote.

From China Fetching: Three main stars of this mansion formed the chest of the White Tiger, and are in charge of the penalty and justice. People of the Three Water Ape Mansion are talented, trustworthy, calm, discreet, adventurous, impatient, sometimes impulsive, rebellious, and greedy. Their lives are full of challenges; if they can build good interpersonal relationships and take wise suggestions, they can obtain wealth and stability.

The White Tiger Palace pic and beautiful carvings of the deities of the Xiu are from China Fetching.